I've been rather crafty, lately. And by that, I literally mean using craft supplies to create a thing.
I started with a cheap, plastic, yellow-gold coloured mask with feathers poking out the top and a funny gold-glittered paper overlay, (I have no photos of this, I forgot to take progress shots, I'll try to remember for future craftilies) and ended up with something that I'm rather proud of. 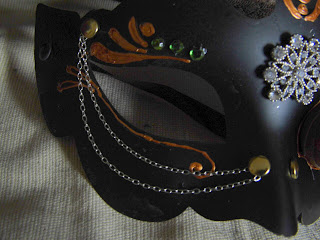 After a surprisingly gruelling battle with the grommets that held on the overlay, I covered the base with spray paint primer and black matte paint. While that dried, I carved up an old plastic 'pirate telescope' for the eye-piece, trying to get it to somewhat match the shape of the mask, by heating up my  craft knife over a candle and using the hot blade to cut the plastic. Possibly not the safest method, but effective.
Then it was some primer and black matte for that, too, followed by three or four coats of bronze paint alternating between horizontal and vertical paint strokes. Then a bit of glitter and blue plastic for the lens, a bit of 3D paints for rivets, and the eye-piece was done. 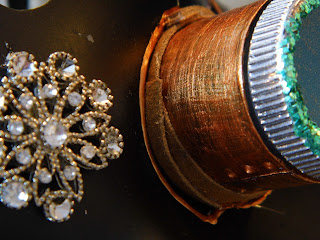 To stop the eye-piece from just sticking out of the eye in the mask with great gaping gaps around it, I cut up an old wide belt to the shape of the eye, cut a hole in it and stuck it behind the eye of the mask for the eye-piece to sit on. Once that was glued on I used some leather thonging to cover up the conspicuous errors I'd made in shaping it. 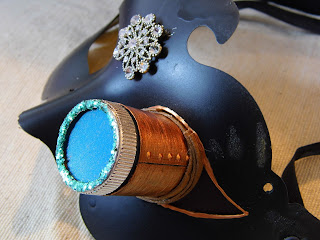 That done, it was simply a matter of some more bronze 3D paint to line the eye, and an old brooch glued in the middle of the forehead to get this: 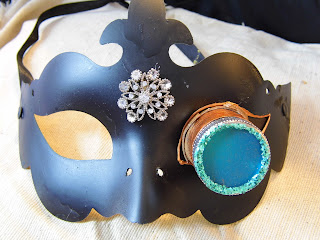 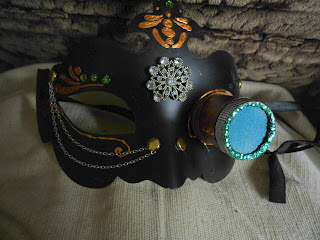 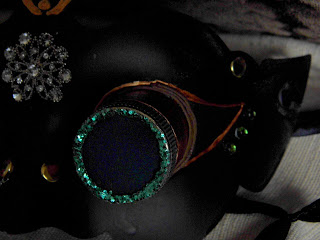 And stage three involved probably the worst time-consumption to actual-difference-made ratio ever: 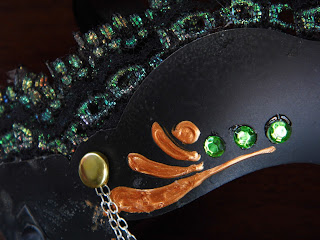 Creating the lace ruffle meant I had to glue it, fold it, more glue, fold it back and then repeat that for each ruffle/pleat. It was oddly exhausting, because I had to hold it down at every stage for the glue to tack or dry sufficiently, which also meant my fingers were completely covered in glue. It was worth it though, because I like the overall effect. And I'm pretty happy with the mask as a whole. 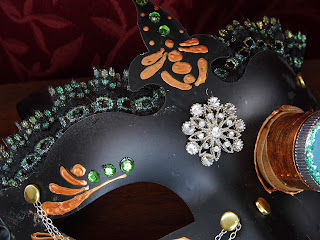 Email ThisBlogThis!Share to TwitterShare to FacebookShare to Pinterest
Posted by Maz

Maz
I'm a 20-odd year old lady-person who is so awesome she's a dork, and so dorky she's awesome. And you just can't argue with that. Also, I might be slightly insane, but you can't prove that.